The Year 2019 presented numerous challenges to farmers and grazers, and consumers.  Among them were significant flooding, dust storms, cyanobacteria (algal) blooms, prevent planting, glyphosate residue issues, and fake meats.  Any one of these challenges is a serious enough issue to deal with, but all of these have occurred within the same year.

Starting in the early spring of 2019 and continuing through mid-summer (and beyond in some areas), there was moderate to significant flooding from the Upper Midwest down through the lower Mississippi Delta.  In the state of Mississippi, farmers in the delta saw as many as 600,000 acres under water for months.  Consistently in the news, there have been solutions proposed by everyone from the Governor of the state, to our state Farm Bureau to elected officials, to the farmers themselves.  These solutions have consisted of two primary tactics: Build taller, wider levies and install massive pumps to pump the water off.

But neither is a solution to the problem.  Building bigger levies is only inviting more severe flooding in the future because man cannot construct a levy that water cannot breach.  Bigger levies will simply create a greater force of water moving down the main river channel and when the breach happens, the degree of devastation and loss of life will be far greater than ever before.

What about the idea of pumping water off the flooded areas by installing massive pumps?  First, where do you pump the water to?  If you pump it off, then it has to go somewhere, and someone downstream has to suffer.  Second, just how well did the massive pumps work in New Orleans when the storm surge from Hurricane Katrina came to town?  They couldn’t pump water fast enough to handle the massive amounts of water entering the city and we all know what happened after that.

Of course, these same farmers are also talking about installing more tile to help drain water off their land so they can plant earlier in the spring.  They are, in effect, paying for their land all over again in the effort to get water off their land.  Many will then feel obligated to spend yet more money on their land by installing center pivot irrigation systems to pump water back onto the land during the drier summer months in an effort to chase higher yields.  Both of these proposed “solutions” are just band-aid approaches that create more significant, unintended consequences down the line.

In spite of being in the news all year—on TV, in the newspapers, magazine articles, and on the radio—not one word has been mentioned about the real solution: Repairing the soil and soil biology.

In the first article of this series, I covered the Six Principles of Soil Health.  No one in the aforementioned debate has mentioned these principles or provided them any credence.  All proposed solutions have been mechanical in nature instead of biological.  All proposed solutions have been about fighting nature instead of working WITH nature.  As a matter of fact, I distinctly remember one article in the Clarion Ledger (the Mississippi state newspaper) where farmers were proudly stating that they would “fight Mother Nature until the bitter end”.   Well, be careful what you say because that is exactly what will happen.  You will have a bitter end.

Throughout 2019, farmers in the upper Midwest and throughout the Mississippi River basin were challenged by severe flooding. Photo by Lynn Betts.

This massive amount of water moving down the Mississippi River from the flooding occurring upstream, all the way from the Upper Midwest, has also created severe problems in the Gulf of Mexico.  First, fresh water infusion into the Gulf caused significant die-off of many marine species such as dolphin, crabs, sea turtles, and other salt water creatures.  Fresh water incursion into the Gulf was increased more than 400 percent in 2019.  Many may think to themselves that this can’t possibly be an issue.  After all, water is water and fresh water flows into the Gulf at all times.  However, when too much fresh water is dumped into the Gulf, it overwhelms the delicate balance and allows the proliferation of bacteria that cause plagues on the skin of marine life that then kills them.  You may also ask, “Why don’t the marine creatures simply move away from all this fresh water”?  The answer is they are territorial and they want to stay in their home waters.  In addition, because this happens so rapidly, they do not know what is occurring until it is too late.

Secondly, this massive amount of fresh water moving into the Gulf carries with it nitrates, phosphates, sediment, topsoil, and many other nutrients.  It also carries antibiotics and other pharmaceuticals that have been flushed into the system, as well as heavy metals, and tons of glyphosate residue.  All this incursion creates massive algal or cyanobacterial blooms in the Gulf.  These cyanobacterial blooms pose a significant human health hazard, not to mention a health hazard for all blooms, all beaches in the state of Mississippi were closed from the first of July until early October.  This resulted in tremendous economic loss for the Gulf Coast region.  People on the coast depend on tourism dollars for their primary livelihood.  Loss of these dollars in the peak summer months is an economic hit that many will find hard to overcome.

As fields in the upper Midwest flooded in 2019, the top soil and sediment carried nitrates, phosphates and other nutrients where they contaminate rivers, lakes and the Gulf of Mexico. Photo by Lynn Betts.

However, there is a much more insidious and dangerous enemy to be aware of. Cyanobacteria can cause numerous health problems including tangled proteins in the brain.  It is too easy to ingest cyanobacteria, either through swimming in infected waters or by breathing in the pathogens.  Once ingested, the bacteria can create a condition that causes the proteins in the brain to “tangle”.  Tangled proteins lead to many different forms of dementia, ALS, and Parkinson’s disease.  This means the full impact of the flooding will not be fully realized until years from now.  Even worse, these impacts are also epigenetic in nature and will impact future generations, as well.

This massive freshwater incursion has also resulted in a hypoxic or “Dead Zone” in the Gulf that has reached more than 7,000 square miles in size.  It’s called a Dead Zone because the water is depleted of oxygen. Where there is no oxygen, there is no aquatic life, creating additional economic loss for Gulf residents, fishermen, and others.

Too Much Rain and Dust Storms

You may be thinking that I am talking about completely separate areas of the country when I mention too much rain and dust storms in the same sentence.  Unfortunately, I am not.  I have encountered this phenomenon more than once this summer in the Midwest when I was traveling to and from Wisconsin in late June, when my route took me up through Arkansas, Missouri, Illinois, Iowa, and into Wisconsin.  All along the way, I saw hundreds of thousands of acres of flooded farmland.  I saw bare fields that had not been planted and were likely enrolled in a program called “Prevent Plant”.  I saw significant erosion, road damage, busted grain bins, and other evidence of flood damage.  These areas were still getting copious amounts of rainfall during late June.  Yet, in spite of all the flooding, and too frequent rain, I drove right through the middle of an expansive dust storm in the state of Illinois.  Yet another massive storm system was moving in to dump more rain on these farms, but the leading edge of that storm was producing high winds.  In spite of having had rain just three days prior, these high winds kicked up so much dust that I had to slow down to below 40 MPH on the interstate to see.  Dust storms and too much rain?  Yes, they can go hand-in-hand.  Not only were these farmers losing their topsoil due to floodwater erosion, but they were losing topsoil by it also blowing away.

Farmers Should Pay for Polluting

I knew that topic heading would catch your attention.  However, it is not a clever title I came up with simply to make you take notice.  On August 25, 2019 there was a major Op/Ed piece published in the NY Times titled “Polluting Farmers Should Pay” In spite of what we may think of this as farmers, we make up less than 2 percent of the U.S. population.  It is not what we think that matters.  It is what the other 98-plus percent of the population thinks that will determine our fate. The subheading to the article was “Fertilizer runoff is making us sick.  States can step in to regulate farmers”.  Is this really what we want?  If that happens, the regulations will be onerous, confusing, and administered by people who know nothing about farming.

The article was authored by Dr. Catherine Kling, an Environmental Economist at Cornell University.  Dr. Kling does a credible job of detailing many of the things I mentioned earlier in this article.  The Dead Zone in the Gulf of Mexico, algal blooms in Lake Erie, algal blooms of the coast of Florida and in the Chesapeake Bay.  She evens points out in her article that all 50 U.S. states have now experienced significant algal blooms.

I believe our call to action is quite clear.  We MUST clean up our own act and take responsibility for what we are doing that impacts people downstream from us.  It truly is as simple as following the Six Principles of Soil Health.  The question is, will enough of us take our call to action seriously in order to abate the coming tide of regulations?  To care for the welfare and engender the trust of the consumer is to nurture our farming way of life—our own futures. We can certainly do this if we endeavor to become the stewards we are called to be.

The Unintended Consequences of Conventional Ag 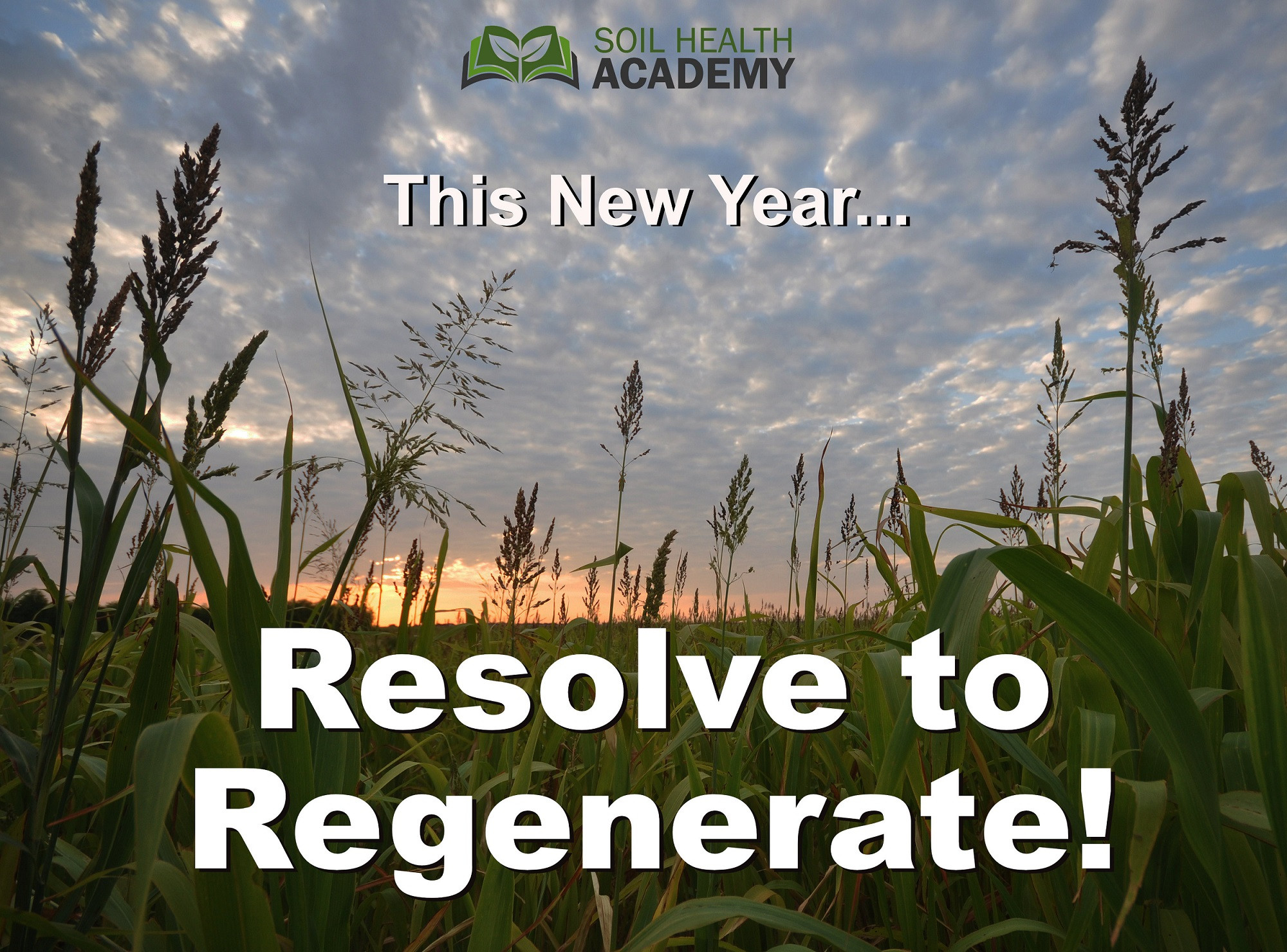 Time for change: The compelling case for regenerative agriculture